Youtube Play Buttons – What are they and how do you get them?

Ever since YouTube introduced the YouTube Play Buttons (also known as Creator Awards or YouTube Plaques), they have become the most coveted social media prize. And for good reason. Play buttons are the only officially recognized status for being a legitimate social media influencer.

Here is how you can start collecting yours so you can show the world your status on YouTube.

What are the Different Play Buttons?

Youtube play button levels are awarded at five distinct intervals of success. Three of the creator awards are relatively common, while the remaining two are the most elite levels to achieve.

So how do I actually get the play buttons?

Here’s the thing, all Creator Awards are issued at the discretion of YouTube, and winning an award is not automatic or based solely on subscriber total.

That being said, the simple answer is that you need to up your subscriber count.

The Silver play button: How do I get this? 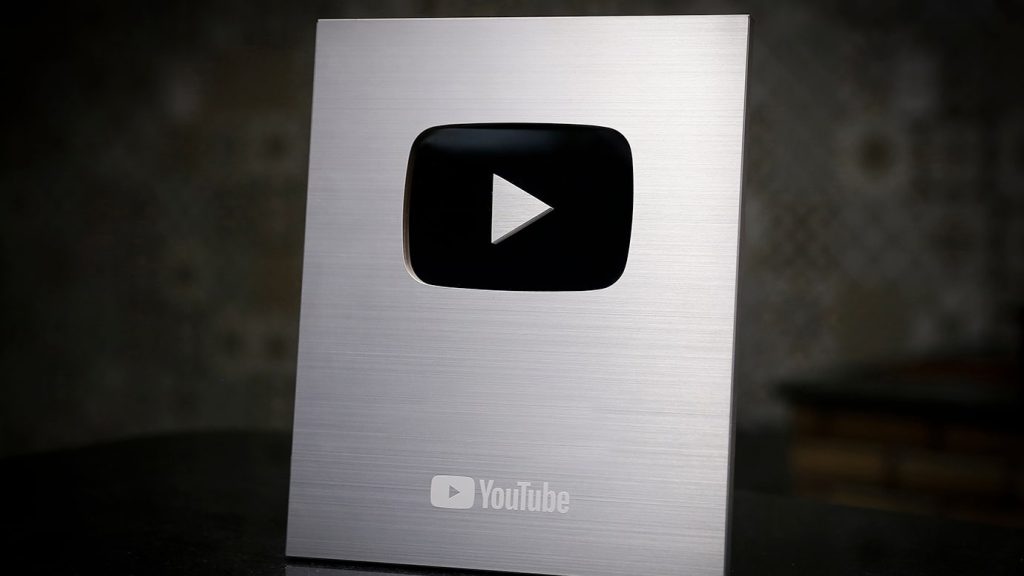 So for this, you simply need 100k subscribers. That’s easy, right? When you look at huge YouTube accounts with millions of subscribers, a number like 100,000 probably seems a lot smaller than it is. For a new channel getting to 1,000 subscribers can be challenging enough.

We’ve put together a guide on how to get 10,000 YouTube subscribers, and that’s a good starting point.

How long does it take to get the silver play button?

There’s no average time specifically for the play button, but to get 100,000 subscribers you can look at existing stats from known channels. Various specialists have stated that it takes around 200-400 videos to hit 100k subs if you’re working hard. Sure, some channels really nail it and make it much quicker, but those are rare.

The Gold play button: How do I get this? 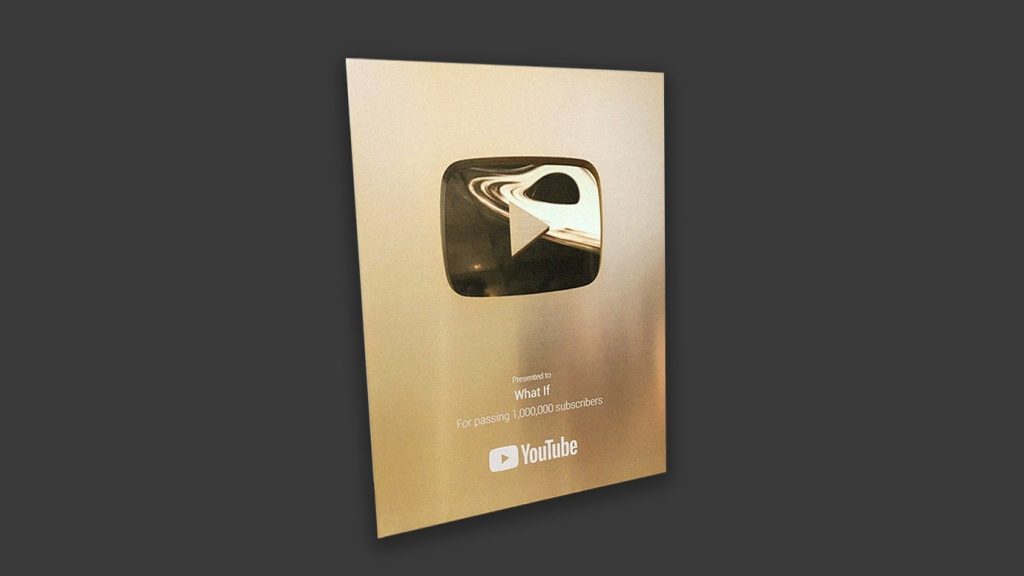 Need some inspiration? Lickd favorites TwoSync and Growingannanas both have gold play buttons, with around 1.5million followers apiece.

We’re very happy to have had a hand in this, helping both of them achieve growth on their channels with our music. See how Growingannanas supercharged her growth or about TwoSync reaping the rewards from licensing popular music.

Now, the required eligibility test is conducted at each level to ensure that channels remain eligible. Simply earning one YouTube play button does not automatically incur eligibility for all future awards.

You’ll need to be confident you’re still eligible, even after meeting 1 million subscribers.

How long does it take to get the gold play button?

As with the silver play button, there’s no real exact time. The same stats we mentioned before say it can take over 1,000 videos or even more to get from 100k subscribers to 1million.

The Diamond play button: How do I get this? 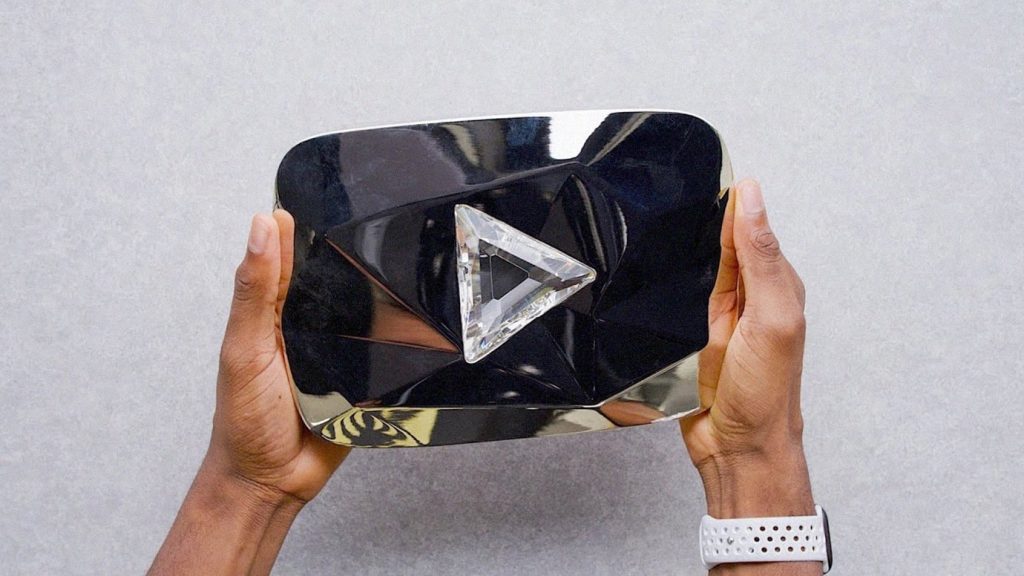 YouTubers like NikkieTutorials and Ninja have been awarded the coveted diamond play button, as well as channels like Tedx Talks and Mr. Bean. It’s not limited to individual creators.

To earn a Diamond Creator Award, an eligible channel must gain a following of at least 10 million subscribers.

How long does it take to get the diamond play button?

Based on how few diamond play buttons there are, it highlights just how difficult it really is. Many of the channels in this space have 3,500 videos, but there really is no rule of thumb. You’ll need to invest serious time and effort into your channel to get this far.

I’ve heard there’s a Red Diamond play button, what is that?

There’s also a red diamond play button, that’s only awarded to people who reach 100million subscribers. This is limited to just 4 channels at the moment, including PewDiePie, T-Series (an Indian music label), Cocomelon and SET India.

How Do I Get the Other Youtube Play Button Levels?

The Diamond Creator Award is where the vast majority of YouTube creators stall. After all, 10 million subscribers is an incredible following, and not easy to reach. However, there is a small select group of creators and channels that have obliterated that milestone and earned a Custom play button or Red Diamond play button. 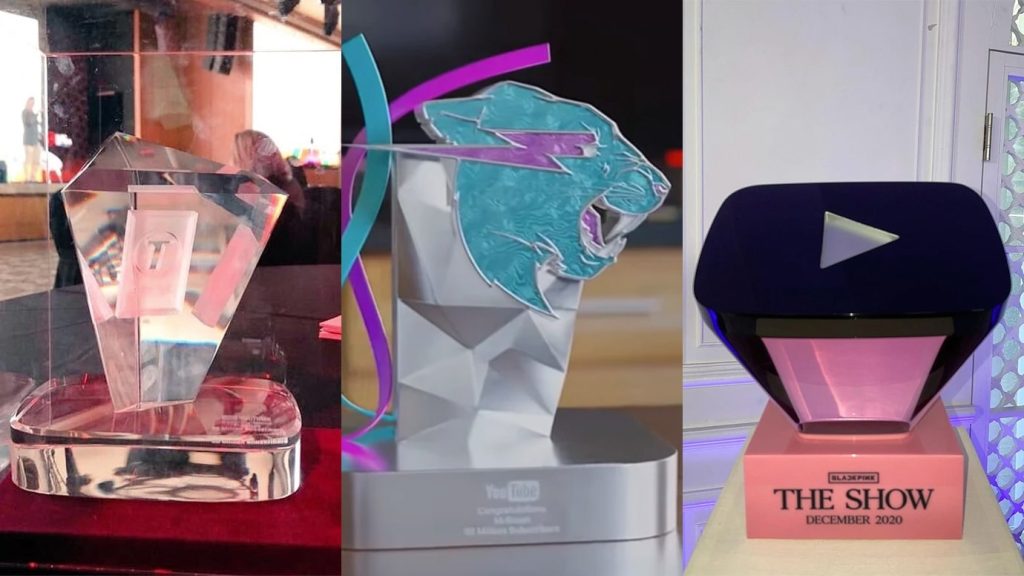 The Ruby play button is earned once an eligible channel achieves 50 million followers, and to date, only about 35 channels have won.

The rarest and most elite YouTube play button is the Red Diamond Creator Award. To date, only a handful of Ruby play button winners have gone on to reach 100 million followers and been awarded a Red Diamond play button.

As previously stated, YouTube Creator Awards are not automatically awarded. Every channel and creator who appears to have reached one of the requisite milestones must also pass an eligibility test before receiving a play button.

This cannot be overstated, every level of YouTube play button is awarded at the complete and absolute discretion of YouTube.

Among the minimum criteria that must be met for any play button is the following:

Some creators have reportedly met the eligibility requirements and the necessary subscriber total for a silver play button, and have not been awarded a YouTube play button.

This appears to suggest that YouTube Awards are not given to certain types of content. While YouTube has not confirmed this, there can be no debating the style and type of content that has been awarded, and thus a clear direction is obvious of best practices for how to become a YouTube play button winner.

We’ve touched on how you can grow your YouTube channel before. But if you’re really desperate to get a YouTube play button, then these tips below will help.

The most important rule to follow is complete compliance with YouTube’s Community Guidelines. This is the very foundation of creating and building any YouTube channel.

It’s very easy to see how channels that have been awarded a play button avoid these specifically stated content areas. So, the established best practice is obviously to avoid them at all costs and focus on what’s proven to work.

Don’t be a stranger, be active and post regularly.

Being active on YouTube is not only one of the minimum requirements of eligibility for any level of play button, but one of the central elements of YouTube success.

The minimum eligibility requirement is essentially posting twice a year. With that in mind, there isn’t a single known play button recipient who only meets the minimum requirements. Most content creators agree that the best practice for success is to post at least once or twice a week.

Audience and content walk hand and hand. You simply cannot be a successful content creator, without an audience. YouTube has videos that cover virtually every topic that nearly anyone wants or needs to see.

So, picking a niche and connecting to that audience is the critical calculus of success.

Every verified YouTube channel and play button winner essentially falls into one of three categories; educational, entertainment, or inspirational. Thus, the vast majority of people who are watching YouTube videos also fall into those audiences, and oftentimes into two of them or even all three.

Many YouTubers will tell you that the best rule of thumb when creating a YouTube persona is to be true to yourself. There is a lot of value in that advice for understanding your audience as well.

At the end of the day, YouTube success is all about the content. And much of the content that current play button winners seem to create is crazy. There is no better example of this than MrBeast. 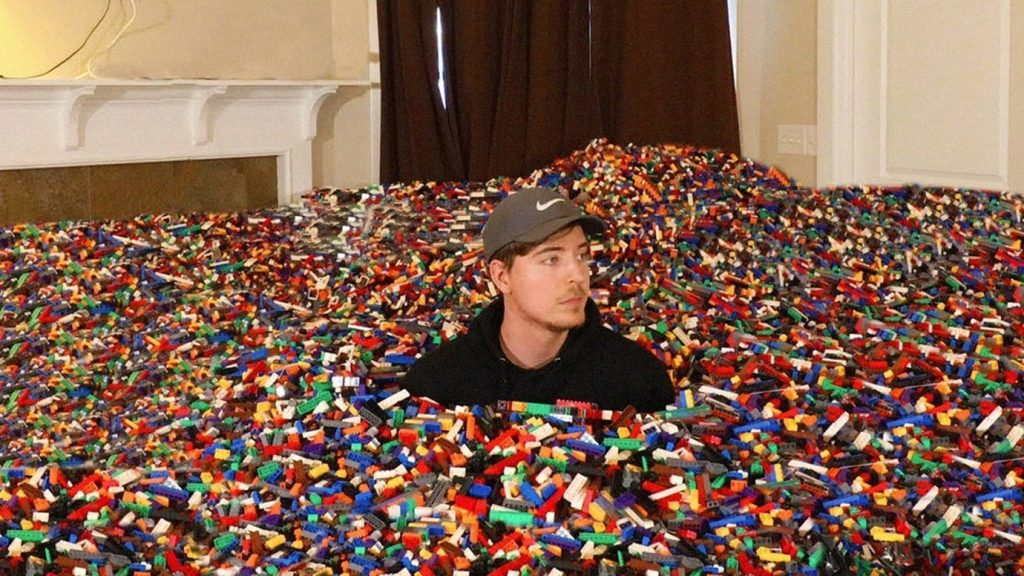 MrBeast’s 10,000 LEGO prank, going through the same drive-through 1,000 times, playing Battleship with real boats, and the world’s largest bowl of cereal all garnered incredible view counts. And to outdo even himself, his 2021 Squid Game video has surpassed 237 million views. Directly due to his chaotic style of content, MrBeast is knocking on the door of the elite Red Diamond with nearly 93 million subscribers.

However, his content is expensive to create. But, the formula works at any level. Exaggerated reality and pushing other creators’ success to the next level has been a winning theme on YouTube.

Your YouTube channel is an asset and keeping it secure is essential. YouTube published its own guidance for channel security which includes four significant elements:

The one thing that makes any great YouTube channel stand out is how unique or different it is. Remember, there are millions of videos uploaded to YouTube every single day. If you want to get noticed in that crowd, then you need to re-invent different.

Say no to copyright

Another critically important eligibility requirement is content that does not violate copyrights. The most common violation and the easiest one to commit is simply using music for YouTube videos. It’s easy to think that music that just plays freely all around you is OK to add to your own content. In most cases, it is not OK.

This is the most legal area of all the eligibility requirements and one that genuinely requires expert assistance. LICKD is the only expert service in the world through which you can add virtually any music to your YouTube videos and still be copyright compliant.

If That Doesn’t Work, Can I Purchase Youtube Play Buttons?

No, you cannot. YouTube does not sell or permit the sale of any of these awards.

Having said that, you have probably seen awards for sale online. You might have even heard the controversy of Pewdiepie trying to sell his ruby play button on eBay…

Not to mention, it doesn’t mean the buyer is actually the recipient of a YouTube play button award either.

Want to grow your channel and get your first play button?

We want to help you get there. Lickd is the first and only music licensing platform to offer creators popular music from artists you’ll actually recognize! Yes, you can use Sia, Charlie Puth, Megan Thee Stallion, XXXTentacion and many more in your YouTube videos, WITHOUT getting a copyright claim. It’s the biggest library of music for creators with over 1 million chart hits as well as the highest quality stock music. Oh, and it’s actually been proven to increase metrics like views, subscribers, likes, comments and the all-important ad revenue.

With Lickd, you’ll be accelerated towards that play button!

So, what are you waiting for? Click the button below to learn more and get started: 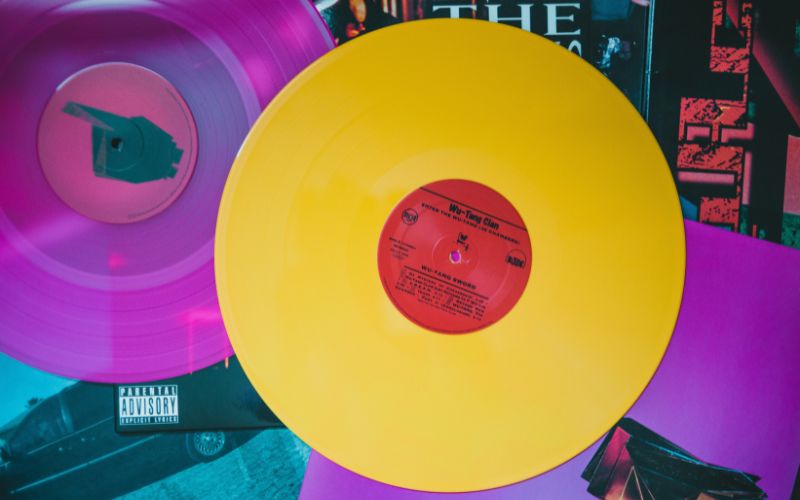 You’re probably here because you, as a video creator, are sick of the basic overused…

The biggest event of the year is back! VidCon, the annual convention for online video…