Which star sign has the best chance of becoming a successful influencer?

Whether you’re a zodiac obsessive or just an occasional horoscope checker, chances are you know something about your star sign, and maybe even identify with certain aspects of your astrology. Many people believe that your star sign can affect everything from your mood to your career – now’s your chance to find out whether your stars are aligned to becoming a successful influencer…

Lickd analysed the birth dates of over 600 of the biggest social media influencers across a range of sectors to find out whether Creators with certain star signs are more likely to find success in the world of social media.

The most popular star signs among social media influencers

After pouring over 600+ social media influencers’ zodiac signs, Lickd found that the most common star sign was Gemini, with 81  influencers having this star sign. Capricorns, however, sat at the bottom of the table, accounting for just 35 influencers.

With Geminis taking the top spot, let’s dig a little deeper into what makes these air signs so well suited to becoming social media influencers.

Celebrity Psychic Medium, Chris Riley says “Geminis, Leos and Scorpios make the best creators and influencers because they are the most passionate and dynamic of the Zodiac signs. These individuals have a deep desire to expand their social circles and their innate personality traits enable them to excel in the areas that inspire them most. This is often in the form of artistic direction and influencing on social media platforms.

“Geminis are naturally playful and intellectually curious. They constantly juggle a variety of passions, hobbies, careers and friendship groups and are known as the social butterflies of the zodiac. Geminis are the quick-witted twins and can talk to anyone about anything, something which shines through as influencers. Individuals with the Gemini zodiac sign flourish when they are buzzing between happy hours, dinner parties, and dance floors and of course posting on social media.”

Gemini social media influencers include the likes of Tyler Oakley, Rose and Rosie, James Charles, and Charles Lincoln of Rhett and Link fame. Perhaps these influencers draw on their astrological ability to create and communicate to grow their following.

Chris comments, “With his birthday falling on 23 May, James Charles is a Gemini. His playful sense of humor and social butterfly status matches perfectly to his star sign. Geminis are well known for juggling passions and friendships, a trait that has helped James become so well known within the industry.”

When we dive into the data even further, we can see that some star signs are more common in certain sectors than others. 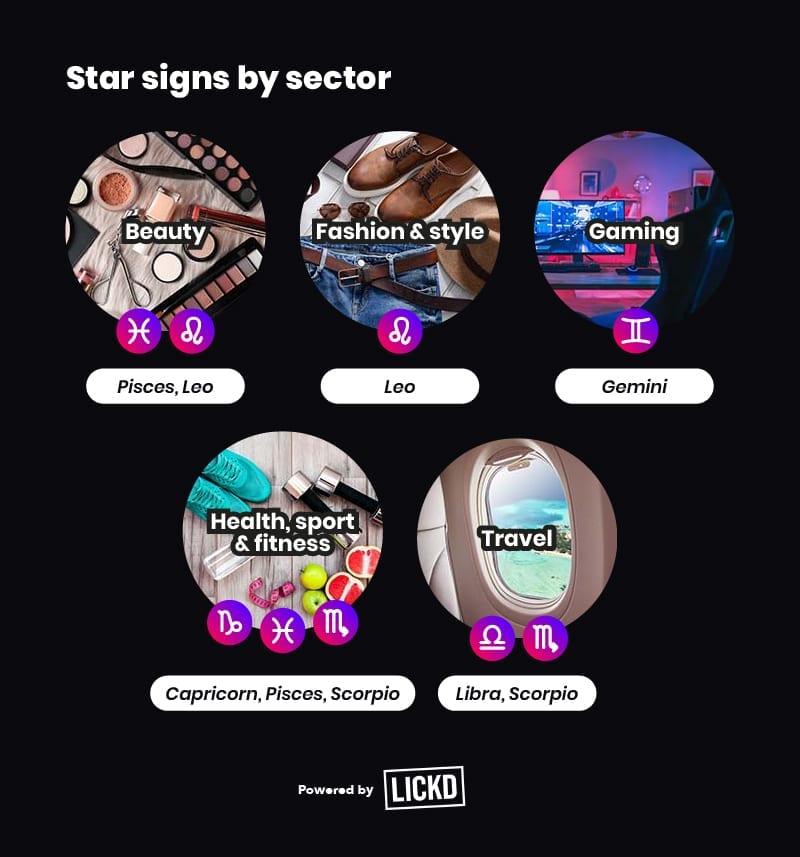 Elements of an influencer

When we group the star signs into their elements; air, fire, water and earth, we can see that some seem better suited to making it big on social media, with air signs accounting for the largest proportion of influencers in the study. 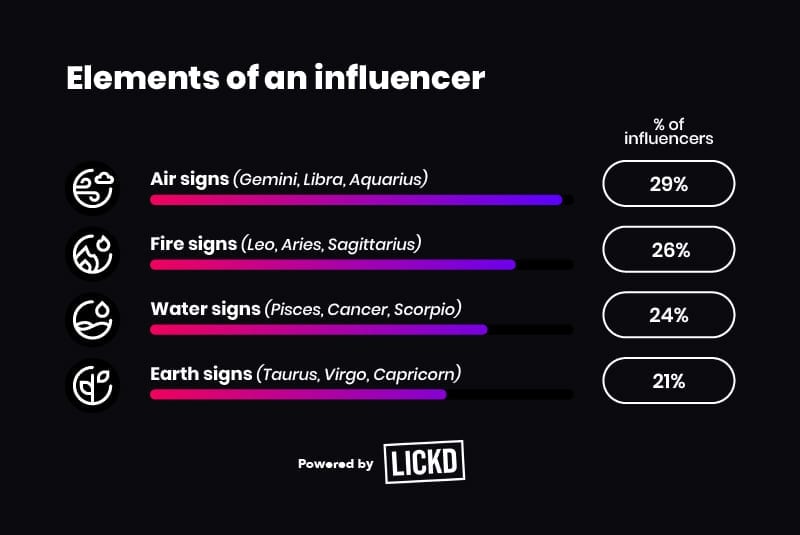 The signs with all the ideas and the motivation to get things done, plus a handy knack for leadership.

Known for being creative and passionate with a somewhat temperamental disposition.

These signs have excellent emotional intelligence with a tendency to be dreamers with their boundless imaginations.

Known for being particularly well-grounded, these are the rational signs with a practical nature and an ability to stay organised.

Who is Lickd anyway?

Lickd allows creators to use mainstream music in their videos for the very first time! Not only that, but it’s the biggest music library for creators with over 1 million mainstream songs as well as the biggest collection of stock music. It’s even proven to help you grow your channel in no time.

Plus, if you sign up today, you get 25% off your first track! What are you waiting for? You deserve better music and it’s about time you got access to it!

Using a number of lists of successful social media influencers, we were able to compile a list of 633 influencers across a range of sectors. These lists came from sites such as:

With this list of influencers, we were able to find out their birth dates by using Wikipedia and Famous Birthdays.